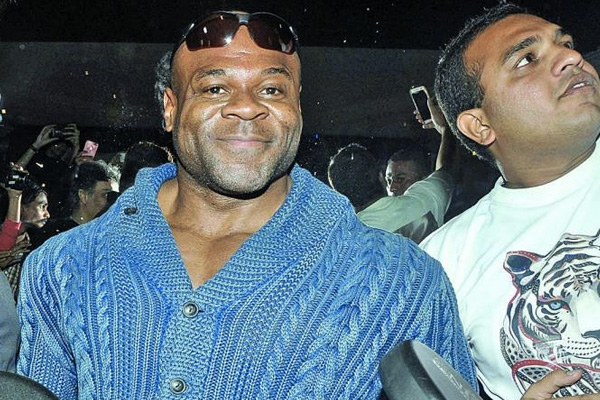 Kai, who hails from New York, Brooklyn, intends to assist Indian athletes and bodybuilders perform better at the international arena.

Mr-Getting-it-done aka Kai Greene, introduced the western philosophy of fitness and bodybuilding to all the aspiring fitness and sports enthusiasts of the country. The American IFBB (International Federation of Bodybuilding and Fitness) professional bodybuilder, personal trainer, artist, and actor during his Mumbai visit revealed that he wants to make India his second home and train Bollywood stars and Indian athletes.

Kai is also the winner of Arnold Classic, one of the most coveted titles in world bodybuilding.

There was a whopping response from the fitness fraternity of the city despite the heavy rains. The crowd kept increasing in numbers, which was surprising for the bodybuilder.  Kai visited two gyms, Nitrro Fitness Thane and Breach Candy. The response was overwhelming at both the venues.

Kai, who hails from New York, Brooklyn, intends to assist Indian athletes and bodybuilders perform better at the international arena. And that’s not where his plan ends; he also wants to motivate the average Indian to take on fitness seriously.

“I am here in India to inspire the country, which has a great potential and future which stimulated the name ‘Inspire Tour’. I want to demonstrate what I have achieved and what any Indian who is willing to work hard can achieve. They will also see that thought become things,” Kai said.

With an effort to promote fitness and bodybuilding, Kai is also bringing his brand Dynamik Muscles to India. He also plans to assist Bollywood actors with correct training, supplementation, and nutrition.

“I want to make India my second home and be their go-to guy when it comes to achieving their fitness goals.” says Kai, adding, “I am glad that Tarun Gill and Umsey Patel supported me in this endeavor sharing credible knowledge with Indians and making Inspire India tour possible.”

They 42-year-old bodybuilder was hosted by Nitrro fitness owned by Prabodh Davkhare who comes from a political background, Prabodh has been instrumental in making Nitrro fitness as the go to place for all Bollywood A-listers.

“Kai has an inspirational story and he connects very well with our Indian philosophy to give back to the community. Kai will add great value to every Indian who is not only trying to get fit but also wants to be successful in life,” Prabodh said.