Diet Vs. Exercise: What Is The Best Thing For Losing Weight 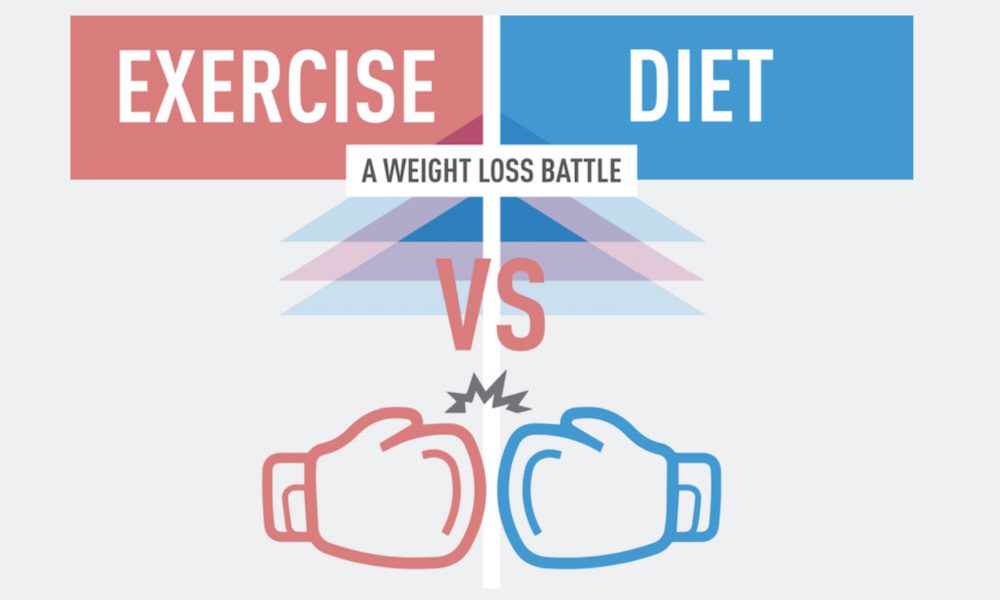 Weight loss is perhaps the most sought-after fitness goal of the modern world. Especially when obesity is on a rampage bringing with it it’s old friends (health issues) like such as diabetes, hypertension, and heart disease (and yes, of course, the weight-shaming people too). Regardless of what your personal reason is to lose weight, finding the best way to do it is just as difficult and full of struggle as actually doing it.

All the gym lovers and fitness enthusiasts agree to the point that one has to work out very hard and concentrate on the diet even more if they have to stay in shape and fit. But, between exercising and dieting which one to choose if we have to?

In order to make a decision, let’s take a look at some of the processes which help weight loss. Generally, weight loss occurs when net energy expenditure exceeds that of net energy consumption. To put it in simple words one needs to burn more energy measured in calories than you consume.

This energy usage/expenditure is achieved by three factors:

BMR or the Basal Metabolic Rate is the functions of the body that are carried out during rest such as the heartbeat.

The second one is the thermic effect which happens during the digestion of food.

The third and the last is Physical activity or exercise which can be anything be it cleaning your house or be it lifting weights. All these three factors are appreciable but the third one stands out in them.

So, basically in order to lose weight out of these three activities, one needs to do exercise more. But a few pieces of research also claim that losing weight is all about eating less than one can burn. To keep it short exercise is about burning energy and dieting is about reducing the intake of energy. So both being equally efficient let’s compare them both as to who does their job better.

Let’s take a look at diet first. When someone on diet wants to get rid of 100 calories all it takes for him/her is to eat half a chocolate bar or perhaps a bit less of a cheeseburger.

The same thing with exercise is almost the same as running a mile or walking a dog for more than half an hour.

And if we want to lose more calories (suppose 200 calories), for a dietician it takes avoiding most of the junk foods (not eating a whole chocolate bar or a cheeseburger) and for a person doing exercise, it takes an hour of exhausting weightlifting session.

So, it seems easier to lose weight by dieting than to tier your way with an extensive workout routine. Nutrient-rich diet instead of junk food would definitely help a person feel like reaching for seconds.

So, does that settle the debate? Just diet is enough?

Well, dieting is the answer if you only want the weighing scale to go down. Exercise, on the other hand, has loads of health benefits than dieting that everyone must possess.

Just take for example the people who are overweight. Simply losing weight with dieting is great, but what it does is that it deteriorates your health further and making you look just the smaller version of your present self. For people who are more capable, they should follow an exercise routine like the Holy Bible.

Exercise benefits you by improving your lung capacity along with maintaining a healthier heart. Some even benefit from the therapeutic high of certain exercises along with the awesome benefit of burning fat from energy generated if you are eating enough protein.

The dark side of dieting is that someday your body will get accustomed to it. The BMR lowers drastically after a period and your body begins to gain affinity to fats. This disturbs your appetite making it shaky and allowing your stress hormones to rise. Because of all of these, lesser energy ends up being burned making your body to send signals to eat even less in order to lose weight.

Daily exercises make everything a whole bit better. BMR goes down after much exercise too but at a slower rate than dieting. Muscle breakdown is slowed down subsequently and the fat breakdown is increased. This makes a person get leaner and also get stronger alongside losing weight. This has been proved especially for beginners. While dieting, on the other hand, makes on look like a smaller yet pudgy self.

But still one has to keep in mind that just exercising is not going to benefit as it still requires and an overall deficit of calories to lose weight.  The saying you can’t outwork a bad diet still rings very true. A balance should be maintained with diet and exercise going hand in hand as each one has benefits of its own. Sure, you lose weight slowly but you don’t have to starve yourself to look healthy, stronger more muscular and most of all happier. Doing both in tandem will probably be the best but if we had to personally choose one we would go with the gym always.

Let us know your thoughts on exercising vs dieting in the comments below.